Melodrama is the stuff of old movies, old stage plays, and many old romance novels. 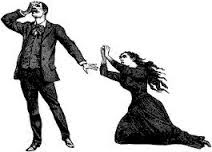 It's hard, sometimes to spot it in my own writing, but for some reason, it screams out to me in my clients' work. And not in a good way. Why does it matter? Don't we all know what the back of a hand on the forehead means? Is it not relatable. No, frankly it isn't.

Do you ever watch old movies? Can you picture Clark Gable, Cary Grant, Mae West, Joan Crawford, and Ronald Reagan (just checking to see if you are still reading) swooning or opening their mouths in perfect circles, eyes bulging?  Isn't it somewhat laughable today to think they were expected to overact like that?  But that was how they made things bigger than life to excite the viewers. 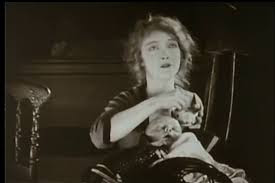 Now it is authenticity that draws viewers in. Think of Nicole Kidman or Meryl Streep at their best. We can see numerous emotions cross their faces in a matter of minutes as something dawns on them. It is often the music itself that sounds melodramatic or old school. To see an amazing example. Watch this clip from Birth, beginning at 1:50.  You'll see so many emotions cross Kidman's face. Can you even count them?  https://www.youtube.com/watch?v=lpJj9c2OV-0


Incredible right? It didn't take exaggerated emotions to get the ah-ha moment across. Her revelation appeared much more like it would in real life if a boy was claiming to be her reincarnated husband (especially her old beau Tom Cruise)... only to end up being true.

Next time your character wants to express undying love, fear, surprise or any number of other emotions, instead of making the dialogue big and unrealistic, use the words or feelings that your character would really have. Method act on the page.
Do the hand on forehead test and say the lines.  Do you feel like you are in a soap opera? If so, make the emotion come from the inside, from real dialogue, real narrative. Let it arise out of your Point of View. And give us the real thing.   Good Writing! - From the Inkpot 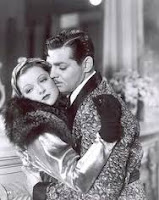 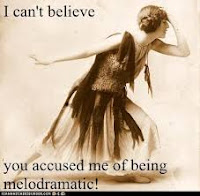 By way of my guest post on her quite popular blog, I'd like to introduce you to Catherine Hamrick.  She's one of those rare writers who take your breath away, even before it's captured by one of the big publishers. I describe her writing as Haven Kimmel if she wrote from the South.  She's not only a seasoned editor and writer, she's an accomplished cook and a keen observer of culture and the beauty of down-home folks. What more is there in this world?  Riding on her coattails, I selfishly hope others will read my post. 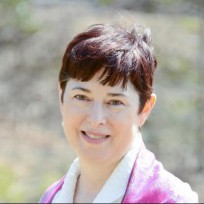 I'm honored she featured me and doubly honored that she calls me a "Triple-Threat-Talent..." Wow, figured I had to use that description in a post of my own!

Do come, read up on my take on Secondary Characters, then tool around on Catherine's site.  She has an eclectic blog; no doubt you'll find something there that will fascinate you.
Posted by Sisters of the Quill at 6:03 PM 1 comment: