Shannon Baker has a right brain/left brain conflict. While the left brain focuses on her career as an accountant, her right brain concocts thrillers, including her 2010 release, Ashes of the Red Heifer. A lover of mountains, plains, oceans and rivers, she can often be found traipsing around the great outdoors. Living for twenty years in the Nebraska Sandhills, where cattle outnumber people by more than 50:1, inspired the setting for this novel. After escaping from the wilds of Nebraska, she spent a few terrific years living in Colorado and then Flagstaff, AZ. Shannon has recently returned to Nebraska and her next book, the first in the Nora Abbott Mystery series, was released in 2013.  Another thriller, Tainted Mountain is set in Flagstaff and involves man made snow on sacred peaks, uranium mining in the Grand Canyon, kachinas, murder, and a woman determined to make some sense of it all.  The second in the series, Broken Trust, is set in Boulder!

Nora moves to and  lands a job as at an environmental non-profit. But the trust is rife with deceit and corruption. Nearly half a million dollars is missing and one person has already been killed for knowing too much. Complicating matters are Nora’s uninvited visitors: her mother, Cole Huntsman, and a Hopi kachina that technically doesn’t exist. As the body count climbs, Nora races to stop a deadly plot to decimate one of the planet’s greatest natural resources.

"Baker deftly escalates the stakes of her initially straightforward story which takes a much more serious turn before arriving at its unexpected conclusion." — Publishers Weekly

While the Nora Abbott Mysteries are available from your favorite online bookseller, if you’d like to support our indie bookstores, you are welcomed to contact Who Else Books at www.BroadwayBookMall.com. They may still have signed copies of my books, and they will be glad to help you!

A fast-paced mix of eco-terrorists, native spirituality, and murder!

All Nora Abbott wants to do is make enough snow to save her ski resort from the drought that is ravishing . But now her husband has been murdered; angry protestors have occupied her mountain; her overbearing mother has blown into town; and energy tycoon Barrett McCreary has launched what might just be a hostile takeover of the cash-strapped resort.

To make matters worse, the local Hopi tribe claims making snow on the mountain will upset the balance of the earth, so Nora turns to the ruggedly handsome Cole Huntsman for help. The only trouble is that Huntsman seems to be playing from both sides of the deck. And when a fortune in uranium claims are at stake, double-dealing is a deadly strategy.

Evil abounds...Frustrations mount...Calls for revenge cry out! In this volume, Desert Sleuths Sisters in Crime offers twenty tales you won’t forget. Victims fight back, police pursue bad guys, scores are evened...but when all else fails, get a taste for how the desert claims its own!

Ashes of the Red Heifer

From the prairies of Nebraska to holy ground in Israel, a deadly battle is underway to force God’s hand. Is a young veterinarian God’s chosen to fulfill the ancient prophecy of the red heifer? Only she can choose. Her own life. Or an apocalyptic war. The future of the world. Or the ashes of the red heifer.

Leaning Into the Wind
Edited by Linda Hasselstrom, Gaydell Collier and Nancy Curtis

“If you’ve never met women who are midwives to calves, foals, piglets, you need this book. These are people who are seldom heard from–rural women, farmers, and ranchers whose voices are all but drowned out in the media noise of late-twentieth century culture. They depict an American West that is blessedly unromantic.”  Kathleen Norris

Woven on the Wind
Edited by Linda Hasselstrom, Gaydell Collier and Nancy Curtis

“Woven on the Wind carries the weight of a communal essay, a beautiful bouquet of touching communications that celebrate women’s ability to share, maintain, and nourish. Every woman needs to read this book for its wit and harmony, its near-Biblical wisdom, and its deep understanding of a unique way of life, and how, in the end, we all partake of the same hopes and dreams regardless of time and place. Woven on the Wind is the kind of book you give to those you care about most.” Ann H. Zwinger

Crazy Woman Creek is a collection of prose and poetry about real women in the West and their connection to a larger whole. Long troubled by the misguided images of skinny cowgirls on prancing palominos, the edtiors embarked on a mission to set the record straight. The wanted these western women to reveal the realities of their lives in their very own words. 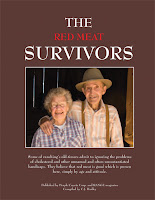 RANGE Magazine's popular feature about this country's old-timers is inspiration for this book. History is one thing, personal experience is another. Memories told knee to knee on an easy country evening establish the texture of the great fabric of life in the United States. You'll love the candor and humor in spite of the hardship and be encouraged by the people who made this country great.