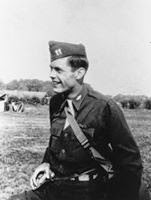 I've cried many times for the men of the 359th Fighter Group, shedding tears for men who were killed in action 70 years ago. Capt. Wayne N. Bolefahr is one such man.  Capt. Bolefahr flew with the 368th Fighter Squadron from April 1943 through 10 June 1944, when he was KIA.  Last week I posted this text on the 359th's Facebook page:

"On this early 10 June mission, the only claims were an electric loco and several goods wagons strafed by Fogg and his flight. But this was the opening of an eventful day. The only mission actively resented by the pilots as “a suicide job” came up next: escort on the deck of four PRU (Photographic Reconnaissance Unit) P-38s to the Antwerp area. The PRU pilots said they had not been able to get any planes back from the heavily defended Lowlands. The 368th was ordered to take them in. Colonel Tyrrell, briefing, warned of the flak and told the pilots they could do little good attempting to intervene: keep the enemy off the PRU and let them brave the flak.

"But the compulsion of the West Pointer’s code of duty, honor, country led Captain Wayne Norbert Bolefahr, beau ideal of the 368th, to do more than that. As the squadron swept in over the Scheldt with the four P-38s they came under a staggering barrage: there were automatic weapons emplaced everywhere along the winding coasts and the railroads, the heavy guns were in motion at extreme slant ranges. Bolefahr, slim, dark, kindly, courteous, a soldier in whom the sense of duty replaced the killer instinct he totally lacked, felt compelled to intervene. He was there. The Air Force wanted the pictures. So all along that blazing route he flew in the van, firing at every emplacement, drawing the enemy flak while the camera-Lightnings went off to the side, making their low obliques. It was magnificent; it was also death. “Bo” survived until 1410, four miles N of Antwerp, when his aircraft flamed under a hail of hits and augured in from 100 feet. Tom McGeever’s P-51 was badly clobbered, too, but he got back to Manston. All four PRUs came home with, the group hoped, the pictures of whatever it was they wanted. On the way back, four locos were destroyed and another damaged, but it was a saddened group of pilots who sat numbly in the lounge at Wretham Hall that night, and the impact of Bo’s loss fell heavily on every man and officer on the ground side who had known him." ~ Excerpt from the June 1944 359th Fighter Group History report dated 4 July 1944.

"Bo" gave his life for all of us, for freedom for the world. Yet that costliest of lessons seems to have faded as people run faster (from home to coffee shop to work to the gym or school and back), talk or text constantly, and rarely pause to reflect on life, to cherish their myriad opportunities. I could easily rant about the evil that seems to promulgate itself in this world of ours, but instead I'll shed a few more tears and continue to quietly work on my manuscript while also sharing photos and stories about the men of the 359th Fighter Group.

I do hope, though, that the story of Lt. Bolefahr's actions that day made a few of you cry. After you've wiped your face dry, but before you pick up your phone, read another blog, or jog to the coffee shop, please take a moment to step outside and gaze at the high, blue sky. Then send a word of thanks to "Bo," and to all heroes.

~ Janet Fogg
Fogg in the Cockpit

Five Things or You Can Do It 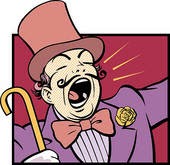 I’m on the downhill side of the Colorado Gold conference. If you’ve never been, you don’t know what you’re missing. A weekend full of writing, writing, writing. Not physical sitting down, fingers to keyboard, but learning, talking, immersing in craft and the business. I attended my first conference in 1994 and haven’t missed one since.

Every year I grab hold of some vital information or inspiration to boost me along my writing path. Last year I got all excited about writing new adult contemporary romance and self-pubbing on Amazon. I tried it. After one and three-quarters books, I decided it wasn’t the path for me. I don’t regret the experiment… much. I wrote a lot of words in a short amount of time, so that is always good.

This year, I focused on my biggest weakness in my writing career. Marketing. To show you how bad I am at this, I had forgotten to take business cards to the Colorado Gold conference. With three books out, I didn’t have one stick of promotional material to place on the freebie table.

I have a natural aversion to promoting my books. I don’t know why. Maybe I fear other people won’t like them. It’s hard for me to remember that professionals in the publishing industry liked my writing enough to invest in it. It also seems that marketing is such an overwhelming maze, with no one knowing what works, that I tend to throw up my hands and retreat.

But no more. I refuse to remain a marketing weenie. Led on by Guerilla Marketer, Julie Kazimer, author of the The Deadly After Ever series with the latest book, The Fairyland Murders coming out in December, I am determined to conquer this fear of marketing.

Julie says to break it down. She suggests we do five things for marketing every day. It can be big things, like calling books stores to set up signings or setting up blog tours. It can be small things, like working social marketing sites or commenting on blogs. She says you can even count leaving your business card with your payment at a restaurant. (Of course, you’d have to remember to have cards with you.)

It’s only been a week since I committed to this. On the very first day, after a business meeting, I pulled out a couple of cards promoting my books. I was very excited when the woman I’d met with emailed me later that day and said she’d bought my book. It’s one sale that won’t make a big difference in my income. But it was the validation I needed.

My next book launches in March. It’s not too soon to start setting up a blog tour and book signings. Because of Julie’s urges, I’ve started putting those events in motion. Five things. Every day.

I work out almost every day. I clean my house, pay bills, all manner of grown up things that require discipline, organization and planning. I worked hard to learn to write well enough to get published. Surely, I can figure out this marketing thing.

I’m jumping back on Twitter. I’m at http://www.twitter.com/sbakerwriter. I think they also say @sbakerwriter, but that will be a lesson for another day. I’m really bad at Twitter. But if all these other people can figure it out, I can, too. So, here’s what, I’ve created my first hashtag #5things. Help me out and if you tweet, send me a message.

I remember when I didn’t know what POV meant. Someone had to teach me about passive language. I can be taught. I can learn how to market my books.