Teaching Through the Baltic – Part Three – Beer in Estonia

We’d started in Southhampton, had visited Zeebrugge and its famous beer, Rostock in former E. Germany and its darker beer, Stockholm and its unmemorable beer, Helsinki and its watered-down, poor excuse for beer, and St. Petersberg--where we had no time for beer on our elaborate and expensive excursion.  I’d taught “Have a Great Story to Tell” and “Writing Your Life” to the curious and receptive who’d passed up a popular quiz game, mud therapy in the spa, a glass blowing show and the fruit and vegetable carving demo.  We were just over halfway through our two-week cruise.
If you missed earlier ports and what it was like teaching on board, feel free to visit:

As our capable captain guided us into our next port, beer didn’t come to mind.  Mistake.


Tallin, Estonia is a delightful sum of many quaint parts: little signs hanging above store fronts, cobblestone roads worth walking on despite the risk of twisting an ankle, ornate lamps, earth-toned vertical homes, 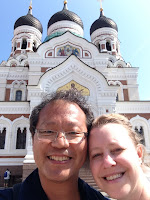 
After roaming the town between sun showers, we slid into an outdoor bench where locals enjoyed elaborate salads and beers.  We ordered two different varieties from the huge beer-shaped menu.  16 oz each. 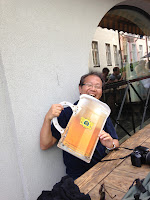 Wen ordered a silky light Tallin beer; for me it was a local honey beer.  Our delicious first sips were distracted when two 300+ pound brothers who might have been twins tried to pry and struggle their way into the bench seat next door.  Finally, perhaps spotting our dismayed glances, they decided to come and scootch in next to us.  They ordered beers that had to be 1 ½ liters.  I thought, “This ought to be interesting.”  And it certainly was!  These two brothers were amusing, and our hour or so with them was one of the most memorable of the trip. 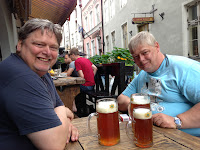 They were frequent travelers to Estonia from Amsterdam and had raunchy tales to tell of their homeland that went beyond medicinal greens and red-light districts.  They shared a unique scoop on Estonia and Holland.

Our dinky beers paled in comparison to theirs so we slid our tiny diminutive butts close to them, took up their mugs (larger than my head) and snapped photos for fun. Since the pictures were on Wen’s smart phone, he immediately emailed them to our new giant friends. 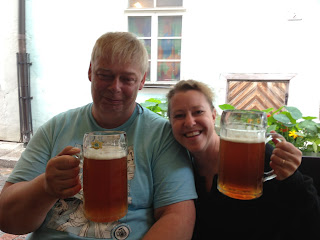 We learned a few lessons: don’t judge a dinner neighbor by his size, open up to even the most unusual fellow travelers, and be sure to tell others about the joy of Tallin’s honey beer, a nice finish to a beautiful day in Estonia!  The best of our trip!

Hey! Where's the champagne? It's in the fridge? Okay then, it's time to launch Trail Winds, five etiological tales presented in this (very short) ebook.

From Splitwing, the first Red-winged blackbird, to HeCoYa, a massive gray coyote, in Trail Winds you'll find fanciful tales of how five natural phenomena came to be.

If you enjoy book trailers...


﻿
Thank you for stopping by!  I hope you enjoy Trail Winds!

Janet Fogg
Janet is also the author of Soliloquy, an award-winning historical romance, and co-author of the military history best seller, Fogg in the Cockpit.

TEACHING THROUGH THE BALTIC -- Part Two


I never would have thought I’d end up cruising through the Baltic, let alone have it be free for my husband and me.  This post is part two of my report on the experience.   If you missed the first one, it can be read here:  http://sistersofthequill.blogspot.com/2013/07/teaching-my-way-through-baltic_16.html

We’d visited London for a few days before hopping on the ship, meandered through Belgium for the beer and Rostock in former East Germany. I’d already taught “Have a Great Story to Tell?” and “Writing Your Life” to eager cruise guests. My husband and I had taken up daily Zumba, become regulars on the ballroom and pop dance floors, and had gotten used to the norovirus-restrictive dining. It was DAY SIX, time to visit Stockholm.

We saw cathedrals that all became a blur, a palace, and the building where the Nobel Prizes are awarded. Then we lucked into a prized spot to watch the changing of the guards. 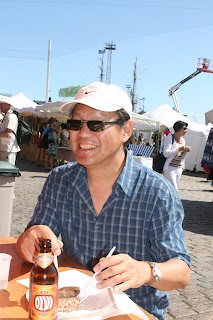 DAY SEVEN we docked in Helsinki. We had little time to do much beyond taking photos of Senate Square, the Rock Church, cathedrals, and museums. But we found time to taste their famous rye-battered tiny fish and reindeer meat accompanied by horrendous room-temp 2% local beer. From Belgium forward we’d decided try a local beer at every stop. Exploring the nooks and crannies of new cities is more fun with a bit of a buzz. Starting our search for souvenirs, we skipped over reindeer pelts Wen had eyed, figuring hometown Boulderites would sniff it out. Every thing was very expensive when converted to Euros. And many of the smaller items were made in China.

We’d barely caught our breath when we woke too early on DAY EIGHT and DAY NINE to join a large group on our VERY EXPENSIVE 2-day excursion to Russia’s St. Petersburg.  If you arrange for a visa yourself ahead of time it is $300.  If you take a $370 excursion it is tucked inside that cost.  So double that and you can see that it was the biggest cost of our trip – since frequent flyer miles got us to and from the ship in Southampton.  It was worth every penny.

Though our guide was painfully political, bashing Germany every other step, she knew all the hot places to go and got us great spots standing before two DaVincis in the Hermitage – the largest museum collection in the world. Then there was the remarkable Church of Spilled Blood.

One of my favorite indoor places of the whole trip was the amber room in Catherine’s otherwise gold-gaudy baroque palace.
In honor of that amazing room, I brought back amber souvenirs.  After all, the ubiquitous nestling dolls were mostly made in China.

Another must-see was the Peterhof with its grand fountains overlooking the Gulf of Finland.     Looking back, that excursion was eye opening. The USSR was enemy number one when I was little, one reason we learned to file down to the basement of our schools then duck-and-cover… not only for the Missouri tornados. The Cold War made me fear all things Russian.

I no longer fear it.

I’ll continue with my writer’s journey through the Baltic in the next post.  Stay tuned!

TEACHING MY WAY THROUGH THE BALTIC

In June I had the pleasure of teaching on a cruise through the Baltic. I’m back and would love to tell you about the experience: the good, the bad and the wonderful. 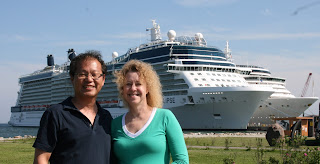 My husband, Wen, and I adjusted to the mid-June BST time zone by staying in London for a few days before taking a bus to Southampton then a taxi to the port. My special boarding letter allowed us into the VIP short line but before we could get into it, we discovered that the port personnel had no idea how to mark our bags. As a guest speaker, my state room wasn’t on the manifest. We were asked to leave them abandoned, isolated from the others. We could only hope they’d make their way onto the ship.

Once aboard, it took a trip to the guest relations desk to find out that our mystery room was just past the “crew only” door. When the bags didn’t arrive, we went searching. We soon found one of them outside another state room door and grabbed it. After informing someone who appeared to be a bag delivery man, we later got the other two.


The first meal was a bit chaotic, as they implemented new server rules after the last trip included a norovirus outbreak. That also explained the obsessive sanitizer guy at the dining room door.

I donned my spiffy blazer and met the activities director and the cruise director to film a teaser for the classes. It would air on the stateroom TVs. We filmed in what would become Wen’s and my afternoon Zumba/karaoke/pop dancing hangout the rest of the trip. In one quick take I gave a brief bio and a general idea of what I would teach. I never turned the in-house TV station on to see it or the subsequent 5 classes I taught. 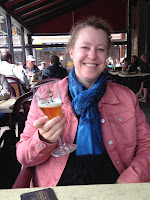 When the next day’s itinerary was delivered, I discovered that my classes were scheduled parallel to a quiz game modeled on a popular British TV show as well as talks about coming ports. The competition was akin to teaching at a writers’ conference parallel to Donald Maass, Deb Dixon and Robert Crais.

After the luggage SNAFU and the clogged up dining hall, I worried about whether there would be an AV assistant helping me get hooked up to the screen when I was to teach the next day.

DAY THREE, Sea Day, 10:15am, first class: Have a Great Story to Tell? I was relieved that the AV guy was there and a perfect helper. I used a headset like Justin Bieber’s and felt like a star in front of the red velvet curtain, a screen the size of a three-car garage door, and one smaller one off to each side. There were 30 or so in the small theater and I discovered quickly that Brits and Australians (and a scattering of Irish and Scotts) were extremely attentive but did not like to raise their hands when queried. I had to adjust; I was used to U.S. writer attendees who tend to be wide-eyed and eager to contribute. I was thrilled when several followed me out, complimenting my PowerPoint presentation, sharing their stories and asking questions. The number of attendees who chatted with me after the sessions grew over the course of two weeks.

My husband and I are both gregarious. We chose the flexible dinner time and to be seated with new people each night. Along with dancing and socializing every chance we got, this was a great way to get to know many guests and talk up my classes—one reason the attendance grew. A new friendship sometimes overrides a quiz game!

The evening after my first class, we returned to our room to find a “job well done” iced-down bottle of Champaign and a plate of apples. Of course, I called the activities director to thank her.

DAY FOUR we strolled through former East Germany’s Warnemünde and took a train into the quaint town of Rostock to visit the Marienkirche Church and see the world’s oldest working astronomical clock (built in 1492).

DAY FIVE, at sea, I taught Writing Your Life to a bit larger crowd. Lots of fun energy and a few people willing to raise hands and ask questions. Balcony vantage at that evening’s Las Vegas-style show offered a view of a sea of gray and silver hair, many likely interested in puttinig legacies to paper. 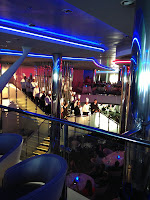 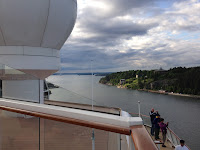 
Trail Winds (an ebook) is now available on Amazon and Smashwords!


From Splitwing, the first Red-winged blackbird, to HeCoYa, a massive gray coyote, in Trail Winds you'll find fanciful tales of how five natural phenomena came to be. 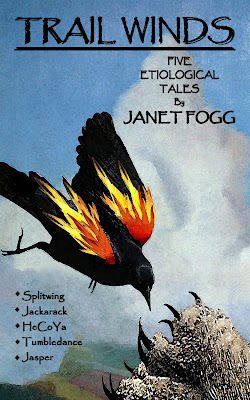