PARADOX OF BEING A WRITER

Each writer is a living paradox.  Emotionally vulnerable, we squeeze our blood onto the page.  And yet we must be thick skinned to face our weaknesses and elbow our way past rejection.

Most of us are introverts.  We spend a lot of time alone.  The keyboard, the cat, and a cup of coffee are company enough.  But we are also expected to taut ourselves, “turn on” to pitch at conferences, stay active on social media, sign books and work our way up to being keynote speakers.

We need to steadily move forward, butt in seat hands on keyboard.  We also need patience.  Some agents take months to respond.  Some don’t at all.  We have to withstand the paradox: hurry up and wait.

Stick to a formula or try something new?  Janet Evanovich’s editor would have screamed had she written two Stephanie Plum mysteries then switched gears to write a western sans humor.  But formula be damned; we grow by trying new genres.  A romance author writes sharp pithy dialogue after trying a screenplay.  A mainstream author absorbs lessons learned from a suspense detour.

While we want our own goals to be within reach, our characters’ goals should be damn near impossible to reach.

Our readers force paradox upon us.  They want bigger than life characters, conflicts with impossible goals and story arcs.  Ironically, those same readers expect believable characters, relatable situations, and inevitable resolutions.  They want to hate the antagonists, but also want them to be heroes of their own stories with a soft side.  Readers want bad guys to get their comeuppance.  On the other hand, they relish redemption.

We can't please them all.  Typical readers seek breezy page turners, but Pulitzer Prize judges wallow in complicated, lyrical works.  Readers want to be surprised, appalled, and tickled.  They want to see the world anew through strange eyes.  Paradoxically, they also want to close the book and realize they’ve just read about themselves.

Inkpot wonders: can you think of any job that is more paradoxical? 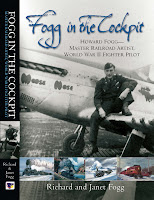 Why collaborate on a manuscript?  Is the sum truly greater than the parts?  In this case it was!


This week I’ll share lessons learned while collaborating with my husband Richard on Fogg in the Cockpit, a military history bestseller released world-wide by Casemate Publishing in 2011.

First I might mention that the book is based on the diary Richard’s father kept while flying Mustangs and Thunderbolts out of during World War II. When Richard and I disagreed on an issue, because it is his father's diary I felt Richard’s opinion should carry more weight. As I’d recently seen my first novel published, and since I also spent more time on this book than Richard, he often tried to defer to me. Most small issues were resolved in this manner, but we did have periodic debates where one of us had to persuade the other to his or her way of thinking. Unfortunately, there were two issues we discussed a number of times with no resolution. We just didn’t agree, and ultimately, one of us simply acquiesced.

We recommend you discuss how you'll resolve a major difference of opinion before you start writing. Describe that process in a memo or letter agreement, or better yet, include it in your collaboration contract. As a side note, our publisher recently complimented us for “putting together such a clean package of text and photos,” so they didn’t stumble over either of our two problem-children. Whew!

Non-fiction lends itself to collaboration. Tasks can be allocated. Research, writing, tracking down sources and supporting documents or photos, requesting releases, editing, all of it is easy to share, more so than when writing fiction.

I started Fogg in the Cockpit by transcribing Howard Fogg’s 1943/44 diary and immediately realized what a fascinating document we had. Once the transcription was complete, Richard and I decided to create a book around Howard’s words. Richard researched significant events during the War that were concurrent with Howard’s service while I worked with the Historian from the 359th Fighter Group Association, Dartmouth College, and other sources to track down photos, maps, and reports about the 359th. Richard also tended to research technical material, such as compressibility or P-51 engine specifications, while I developed a mission map and verified geographic references. We shared efforts researching other supplementary material, including pilot terminology, military abbreviations, descriptions of the aircraft used by Allied and Axis powers, and so on.

We both drafted text for the supplementary material and we both edited our own work and each others. We were extremely fortunate to have an enormous number of reports and photos available from the Group Historian, and Richard and I spent days studying everything and debating what to include. Since then we’ve discovered that the Historian had a few other reports we were unaware of. While we might not have used them, I do regret not being aware of those documents until very recently. Lesson learned? Keep asking your sources what else they might have!

The week before our submittal deadline Richard double-checked facts we presented in the supplementary text while I edited based on the extremely detailed Author Guidelines from Casemate – both nit-picky, time consuming tasks. I also coordinated the 116 image releases while formatting the images electronically, as Richard drafted and refined the accompanying 15 pages of captions.

I should now mention where collaboration saved us. We had a working draft before sending out queries, but Casemate wanted a bigger book, and they wanted that bigger book submitted two months after we signed the contract.

We brushed up our original draft, verified facts, finalized images, and added 121 pages in a combination of new text and excerpts from the 1944 Group Historian's Reports - all in 53 days.

It’s good to have a partner!

What if you’re the “writer” partner collaborating with an expert in some obscure field? Or you've been asked to ghost-write a story? You need a contract that describes how you'll work together, who's responsible for what, how decisions will be made, how you'll share royalties or be paid, and who gets credit for what. Be clear before you start.

Next month, when I look at collaborating on a novel, I’ll include a list of points for you to discuss with your collaborator, as well as an example of a simple collaboration letter agreement.

(Originally posted on Chiseled in Rock in 2011)