Calls for revenge cry out!

In this volume, Desert Sleuths Sisters in Crime offers twenty tales you won’t forget. Victims fight back, police pursue bad guys, scores are evened...but when all else fails, get a taste for how the desert claims its own! 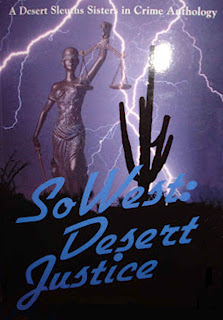 SoWest: Desert Justice was released on July 21, 2012, and includes the story "Lucky Me" by Shannon Baker!

Here's an excerpt from "Lucky Me."

...The water surged around us, buffeting the rubber floor of the raft, rocketing us forward into a gauntlet of sharp rocks, white, frothy mountains of icy river attacking us. A lone body in this would be like a single sock in the devil’s washing machine. A lone body would disappear. At the very least, it would turn up with holes ripped through it. Poor Julie.

I slid off the side of the raft into the bottom and huddled close to the center loaded with dry bags tied so securely they’d probably come through the Apocalypse intact. As I landed on my knees I reached forward. My fingers closed around Julie’s slim ankle...

Shannon Baker's first book in her Nora Abbott mystery series, Tainted Mountain, will be released in March 2013 by Midnight Ink. 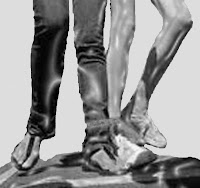 Is the sum truly greater than the parts? It could be!

When considering this topic I was reminded of an analogy used by one of my partners at OZ Architecture. He described several of our designers as cheetahs – sprinting ahead of the pack to try to land a project and then dragging the kill away to gorge on all by themselves. But then, if they needed help, guess what happened? Suddenly the cheetahs became interested in team work and learned to share. What does that have to do with collaborating on a manuscript? It’s analogous. An award-winning project can be designed by a team and a contract-winning manuscript can be written. It’s fun, often more efficient, you have a partner to back you up when you’re failing, tired, or just plain sick of the project, and yes, sometimes it can be a pain in the ass. But the pain can be circumvented if communication is clear and egos are (mostly) checked at the door.

I’ve collaborated on award-winning screenplays, a military history bestseller, a narrative non-fiction, and a novel. I used to do quite a bit of ghost-writing. I love writing solo and have been published, yet I also enjoy collaborating. It’s nothing to fear, especially if you’re a good communicator and plan ahead.

First up? Collaborating on a screenplay.

What if you have a great concept, start drafting a manuscript, and your wheels won’t stop spinning? Yes, this happens to most writers at some point, but I mean spinning so fast that the wheels carve out a quicksand-filled sinkhole. Should you abandon thoughts of escape? Perhaps not. I’ve collaborated with Karen Albright Lin on several screenplays, and our first effort, Headhunters, began in exactly that fashion. I had a concept, started to write the book, and then hit quicksand. Why? I’m not exactly sure. The story just didn’t sing to me anymore. I was vigorously and thoroughly kicking myself when Karen suggested my concept would make a great screenplay. Voilà! She remembers that I suggested we write it together and I think she did. See? A great collaboration, where each gives credit to their partner! We had a blast and I believe Headhunters was meant for film.

Karen had already written several screenplays so she generously shared her expertise, and together we brainstormed the characters, developed the plot, shared time on research, and then alternated writing scenes. We both edited every sentence. Since then we’ve co-authored another screenplay based on a concept of Karen’s, and have a third in development. All three are award-winners and we’ve even had a agent, though we ultimately severed that unfruitful relationship.

We discovered that I was better at writing action scenes (gimmie a car chase and a bunch of thugs with guns!), while Karen excelled at quiet, introspective moments, so we allocated scene drafts accordingly. I’m an early riser and Karen works late into the night. This worked to our advantage when we had a deadline, as we wrote in shifts, emailing a draft back and forth, morning and night.

Then there’s marketing. Whether pitching a story in person or subscribing to an on-line lead service, sharing that burden is not only attractive, it’s cost effective. Quite frankly, it’s also a hoot pitching with a partner. Playing off each other is effective and far less nerve-wracking.

Be aware that if you’re interested in writing specifically for , collaboration will be your middle name. If your screenplay is optioned there will be re-writes, possibly by you and definitely by others. Then a shooting script will be developed and the story may change all over again, and it’s unlikely that you’ll be involved in those revisions. Writing for TV is another tale, as episodes for a series are invariably written by a team. You’ll also need to move to to achieve that particular goal.

Back to Headhunters. Did we stumble during this three-legged race?  I don’t think we even stubbed our toes. While we had a tendency to debate whether a character should act or speak in an overt versus subtle fashion, they were respectful debates. Together, we pounded out the plot points, just as we shared the writing, editing, and research, and continue to share marketing efforts.

Screenplays lend themselves to collaboration. Action needs to be described in a consistent, crisp style; characters should be well developed with no superfluous dialogue. Karen and I work and play well together. It helps that we have similar goals and are unafraid of revisions. We both want to write great stories and sell them, so we’ll continue to stride towards .

But there are other races to be won! Next month I’ll talk about lessons learned while collaborating with my husband, Richard, on Fogg in the Cockpit, a military history bestseller released by Casemate Publishing. After that I’ll look at co-authoring a novel, and I’ll also share a contract sample and suggest discussion points between collaborators.