All Dogs Can Learn New Tricks

Take it from this “old dog,” it is possible to change course, attitude and goals. In elementary school I wrote poems, later 12-year-old erotica. 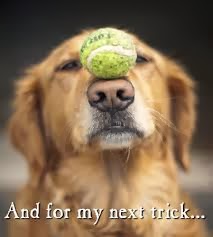 My high school creative writing teacher entered my work in contests and drove me to regional writing conferences.  Together we started my high school literary magazine.  A few of my shorts and poems found homes in regional lit mags.  In Paris I had the privilege of editing Paris/Atlantic which published writers as well-known as Archibald MacLeish, David Avidan, Vasco Popa and Antonio Cisneros.  It was a perk to be published alongside such great writers.  I had a happy little stack of published work, and I started to feel I was a real writer.
After getting married, I was distracted from my writing as I worked as a weight-loss counselor then as a high school substitute teacher.  When I became pregnant with my first son, I knew I wanted to be a stay-at-home mom.  What’s a more flexible way to do that than to be a writer?  I had no affiliation with a literary magazine at that point.  I’d need to learn a new trick, write something book-length.  I wanted to honor my husband’s resilient, loving family by writing their remarkable story.  His father was put on death row for whistle-blowing on his Taiwan-government-connected employers.  It left the rest of his large family homeless. That creative nonfiction was represented years later by NY agent, Kathleen Anderson.  It didn’t sell, perhaps in part because expectations were set high.  She compared it to master Amy Tan’s work.  Though my subject matter--Chinese family dynamics--is similar, her style is quite different than mine.


American Moon had food as one of its themes, even recipes in the back for each dish served in the story.  Having been raised on mac-n-cheese and hot dogs, it’s ironic that exotic food is one of my passions.  I loved food cooked in leaves (vine, bamboo, lotus, etc), I decided to write a cookbook.  Time for a new trick.  Wanting the cookbook to reflect my love of story, I decided it would be a literary cookbook, with folktales that explain the foods.  I worked on the research and proposal over the course of many years.  Legendary agent Jane Dystel tried to sell it for a year, then our contract ran out in 1997. A few other agents had a passion for my subject and represented it only to receive similar editor feedback: “Karen leaves no leaf unturned, this is a great proposal but we can’t imagine someone coming home and saying, ‘I think I’ll cook in leaves tonight.’”  It’s hard to fight a 3-minute cookbook trend or one that prefers famous chef authors.  The three file drawers-full, knocked from within every so often trying to get attention.  A few months ago my new agent, Deborah Ritchken, brought my book to Skyhorse Publishing.  I had to learn the new trick of social media crunching, needed to build my numbers, join every on-line food organization I could find, become active in the communities.  I needed to learn a very important new trick before I signed my contract with Skyhorse for Nature’s Wrap.  After some contractual adjustments made by Deborah and quite a few clauses I caught and addressed, I took my agreement to amazing transaction attorney, Susan Spann, who suggested more important changes to the contract before I signed.  When the agreement was as favorable to me and my photographer as it was going to ever be, I signed and faxed it off to no-doubt exhausted Deborah and patient editor, Nicole Frail. But all the new contract tricks ended up being filed for future use. Literally hours after I signed, my photographer backed out.  The money, she decided, didn’t make all the time worth it for her.  After a wide-net search for another photographer who could work with the low photo budget (including loop queries, Craig’s List ads, and lots of social media outreach), Deborah and I realized that my own attempt to take the photos came up quite short and my learning curve made the project impractical.  We had to back out of the contract.
Trying another trick, I wrote a draft of a mystery utilizing my experience volunteering at a crisis center.  I quickly set it aside having the itch to get back to my food theme.  Without much thought and even less planning, I decided to learn yet another new trick.  I wrote a series of humorous personal essays about marrying into a Chinese family.  Some were honored in contests and were subsequently published as one-offs on line.  But my agent at the time, Kathleen Anderson, insisted that essays don’t sell unless you already have platform.  Not wanting them to simply sit in the drawer under the one occupied by American Moon, I took the recommendation of my Sisters of the Quill to use them to put together a novel.  So I turned first person narrative to third person action and dialogue and created a plot on which to hang the stories like clothes on a line.  That was the most challenging of my new tricks.  But I still had fun with it.  It didn’t catch fire (or at least hasn’t yet).  I’ve been told that the humor feels more appropriate for stand-up comedy than a novel, and that the essays still peek through.  The point of view character is still me.  Too much of the “personal” stayed behind.


Several years ago, at the Pikes Peak Writers Conference, in a pitch practice session, I hesitantly read into the microphone the pitch for a new paranormal suspense novel I’d started.  “A mother wades through Chinese mythical culture to free her son of the hunger striker who has possessed her son.”  Workshop leaders, Jan Jones (a filmmaker and future mentor of mine) and producer Ken Berk, asked me to read it again.  Ken asked to see me after the workshop ended.  He wanted to package my story for sale if I was willing to write it as a screenplay. After I signed with an entertainment attorney and purchasing a stack of screenwriting books, I buckled down to learn another new trick.  That first screenplay placed second in a contest right out of the gate and my trajectory changed.  I completed a dozen scripts (a few of them shorts, several of them collaborations – with Janet Fogg, Christian Lyons and indie director, Eric Toll).  These scripts all counted as new tricks since they involved a new format but also a wide variety of genres: Sci-Fi, romantic comedy, dark comedy, broad comedy, supernatural thriller, paranormal suspense, dramedy, and heist. Most won regional, national, or international awards.  One caught the attention of a Hollywood agent who brought it and a few others to Barry Sonnenfeld, James Cameron, HBO, Showtime, and Sci-Fi Channel.  It was yet another new trick to have one of my short writer-for-hire scripts produced by a local director after one of my spec scripts was chosen by an indie producer from among other audition pieces.  That long screenwriting detour included one of the most rewarding new tricks of my career, collaboration, and led to the column I write for BTS Book Reviews.
In the middle of it all, one of my short stories caught the attention of Maggie Osborne, a wildly successful writer.  She offered to mentor me.  She advised me on the business end of writing and took early peeks at my new projects.  She told me when it was time to seek a different agent, something I was afraid to hear.  To this day I’ve had 5 agents and have been offered representation by a few others.  At one time it was scary letting an agent go—as if nobody would ever come along and offer representation again.  I’ve conquered that fear…. a new trick for me.


Now I’m writing a serial-killer suspense novel, one I suspect will be the most marketable of my book-length works.  Still food themed but it’s a new trick for me to dive into the mind of a serial killer.  Kind of fun.
For a while now, I’ve been able to contribute to the family income through professional editing, coaching, writing-for-hire, ghostwriting, and writing for magazines and newspapers.  I judged contests, facilitated critique groups, wrote monthly columns, and taught on cruises, at conferences, retreats and in schools.  All new tricks.


Some tricks I wish I hadn’t been forced to learn: One agent sabotaged a big celebrity ghostwriting project, forcing me to hire an attorney.  One client failed to pay me for months of work.  The cookbook still doesn’t have a home, which means my bucket list of one item (publish a book length work of my own) is still without a checkmark.  Many of my projects still rest in drawers, testaments to the longest apprenticeship on earth.  But I wouldn’t trade the years of effort for all the success in any other career.  I’m a writer.  For me it has been all about learning new tricks.  And it will be until I can no longer hold a pen in my hand.
What new tricks have you learned?  --Inkpot
Posted by Sisters of the Quill at 12:21 AM