Over lunch this week, my sisters of the quill brainstormed with me about how to make my protagonist a more interesting, fun character to write.  Right now she’s a bit like Silvia Plath if she had been a cook.  She has a sordid past with baggage.  She’s a media-shy amateur sleuth, and that poses problems for her and between her and her ex.  She has a career that allows her to cross paths into red herrings and the killer, an expertise that is intimately connected with the plot and solving the main story question.  But something is still missing, something that separates her further from being me.

I’m not whining that I’m bland or that I lack a third dimension.  I am, however, not a good fiction character because I’m extremely risk averse, which means I don’t walk into trouble or take on anything that a good girl scout would avoid (ironically I contradicted that by choosing to be a writer which challenges me every moment with the ultimate obstacle course, but that’s another post).


It wouldn’t fit to power my sleuth up with a “thing” like Columbo’s outfit, complete with cigar and rumpled raincoat, unusual garb for a homicide detective.  It worked for him because it fit with the deceptively bumbling way he caught criminals. 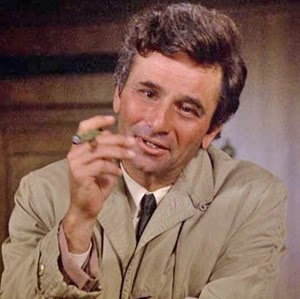 It can’t be as campy as Marty Mcfly’s inability to tolerate being called a chicken by Biff in Back to the Future.  That was a cartoonish story that could manage a “thing” that allowed for such an in-your-face flaw.

Mine is a different kind of story altogether with its own needs.  Other than my protagonist, I feel I have a grip on others who populate my story.  I’m happy with my other two POV characters, my secondary characters and even my red herrings.
The maddening impasse is with my darned amateur sleuth.  I need to step far outside my skin, outside my family culture to enjoy writing about her.  From the beginning, I gave her many of my traits so I could relate to her.  I’m somewhat shy, unless forced into a situation where I have to be gregarious.  My character is shy to the point of preferring isolation from the general public.  I’m a cookbook author.  She’s a culinary instructor and food scholar.  It is handy to know my way around a kitchen for her sake.  But she needs something more.
To be relatable, and fascinating, I want her to be more than simply a heroine with laudable intentions, a pillar of her community, someone with impeccable ethics with no baggage clouding her judgment.  Who in my sphere is that generic and unsurprising?  Would I admire a bland friend like that?  Well, maybe my next door neighbor; predictability is comforting when it comes to the one who checks in on me if I’ve accidentally leave my garage door open all night.  But even he, behind closed doors, isn’t likely to be exactly what I expect.  And what does my protagonist do behind closed doors?  That’s what I need to figure out.  What’s her “thing”????
The sisters toyed with a few ideas and Stormy wondered if my character’s consequential flaw might be that she always tells the truth, that she’s compelled to do so because she believes that hiding a truth from her father led to a delay in finding her mother who disappeared when she was a child.  But as I thought through this interesting idea, I discovered that always telling the truth doesn’t work with some aspects of the plot.  That’s because of how the story unfolds (including a scene in which she chooses not to scare her daughter with the “truth” of their plane’s mechanical problems).  I need to allow room for skirting the truth, yet she could be painfully conflicted about it.  She believes that one truth as a child led to her mother’s disappearance and a lie led to her mother’s death.  So confessions and a fibs both led her to falsely believe she’d set dangerous things in motion when she was still in elementary school.  The duality is a nuanced trait for a 350 page book.  It could be absorbed by the page unless in narrative she is often waxing worried over decisions about telling the truth… It could easily be overdone.  Maybe my skill level isn’t quite there.
I continue to brainstorm:
Some lie too much.
Some tell too many truths.
When you are sad, even a broken egg is too much to bear, let alone talk honestly about.  No.  No.  Inky.  That is too Silvia Plath.
How do you find your “thing”?   -  inky