MY MUSES ARE STALKERS: I’m Not Kidding! 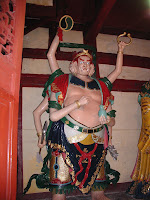 I used to think of stalkers as jealous former boyfriends and girlfriends, disgruntled ex spouses, obsessed co-workers, determined paparazzi, and obnoxious groupies. But I had to add to the list MY MUSES. I have twenty-five of the pesky perpetrators. You won’t feel envious when you hear how they operate.

The more benign stalkers like to hover like morbidly infatuated admirers. These muses tend to be observers who, on occasion, feel compelled to throw their two cents into the money jar. Alexis—in Greek “to help”—butts in when I least need her, like when I’m spending my one hundredth day researching the mating habits of iguanas for that one scene in ACT II of my latest screenplay. Velda is a hangeronnner who throws her weight around even when I’m supposed to be talking to my mother on the phone.

My rejected stalkers are intimacy seekers who’ve devolved into resentful muses. They are pathologically jealous of my time. They forget I have a life to live outside of fiction. They castigate until I’m on my knees, and if I don’t submit to their demands, they become vengeful, turning my characters against each other or taking my stories in directions I hadn’t planned. They can either save my book or mess with my mind so much I delete the damn thing. Oneida is a rock muse who is more like a ball and chain and makes it hard to go for a good long walk. Tanner tans hides. Then there’s the tallest of my muses, Sasquatch. I have no idea how he wheedled his way in there.

Some of my stalkers are kind of cool. One clutch chases after me while quilting the orange and red cloud threads at dawn. It’s quite a trick. They are particularly good with scene setting and choreography. One calls herself Seraphina – “fiery one” in Hebrew—who knew some muses were Jewish? Tara is a Colorado mile-highness, whose moniker is Irish for “an elevated place.” She inspired the bizarre locale of two of my books, the bohemian bastion of Boulder. Then there’s Muse Pearl…The secretions of a mollusk? Guess she’s meant to be atmospheric.

I tremble now as I think about one gang of stalkers who strike fear in my heart, pancreas, and other organs. They’re soul sucking dementors who threaten to bounce me down to hell and back to find my stories. These muses are overly careless with cattle prods and Donald Maass books. You’ve heard of plot reversals? That’s Muse Kylie’s Australian specialty, the boomerang. When I fail to twist my plots around often enough to entertain her, that damned wooden “play toy” becomes a weapon. Muse Melanie’s French name suits her. It means black and dark, and she never fails to show up late and force my protagonist to choose between two devastating courses of action. Frederica, a “peaceful ruler,” specializes in dénouements. Don’t be fooled by her name though. If I don’t leave a reader wanting more by the end of the book, I’m thrown into the torture chamber with Muse Gertrude and her spear, Edger Allen Poe, and Wilber the Wild Boar. How that last muse factors in, I’ve never quite figured out.

Some of my stalking muses are cranky and demanding about character development. Bridget—the exalted one—is an old-school nun who ruler-slaps me until each of my characters is a hero of his own story. Rhianno—the Great Welsh Queen—is the storm in brainstorm when it comes to protagonists. Muse Calvin insists my characters are adequately flawed. His French name means bald. Go figure.

The intimacy seekers believe I’m their soul mate. Their love letters are false starts. Shshshshhhhh. Don’t tell them a few have been recycled or have been critiqued into submission, by human friends no less. Stalkers of this variety are usually torn between reconciliation and revenge. Acacia—Greek for ”point of a thorn”—is a pain in the buttocks and is almost as ornery as Anise and Saffron, who sprinkle themselves all over the page when I’m working on one of my literary cookbooks. Then there are the naked muses, Cherry and Beverly Beaver Stream, who come creeping into my bed when I’m doing hands on research for flash erotica.

My nitpicker muses are irritating little Tinkerbell types who seem to think I need inspiration in the area of punctuation, grammar, and spelling. Courtney insists her name means short nose; but I think it means raised nose. She’s got a problem with peek and peak, bare and bear, and don’t get her started on to, two, and too! Blair lost her wings long ago on the battlefield. Trapezius stubs aside, she still takes up arms over the stupidest little things like periods and commas always belonging inside the quotation marks. Pu-lease! Making things worse, these persnickety muses are in league with the cyberstalkers.

They are a fun bunch of blokes.

Know what’s really scary? These cyber-bullies and gnat flickers have formed an alliance against my favorite muse, What-Will-Be-Will-Be Cassara. The nitpickers only allow her near me during my rushed first drafts. But once she’s done her job, the cyberstalkers kick her to the side, grumbling like hung over puppeteers pulling my strings as if I was their bouncy flouncy editorial marionette. I resent that!

I’ve learned a thing or two about dealing with stalkers. I’ll share my lessons with you. Don’t engage them unless you’re determined to publish your book. Reach out and tell others what’s going on. Others suffer with their own muses and are eager to form stalking muse support groups. See? I told you, muses aren’t always as angelic as they’re made out to be. Or are they? - Inkpot
Posted by Sisters of the Quill at 12:30 PM