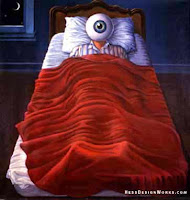 I was staring at the interesting patterns cast by the full moon through the light tube in the bedroom ceiling at three, twelve this morning. Before I was a women-of-a-certain-age, I never had insomnia. That thought struck me with a sigh of frustration. Then I remembered what one of my wise Sisters (of the Quill) said about her wakefulness. She said she thinks of that quiet time as a gift she can use to think. Who couldn’t use some uninterrupted brain time?

I started reworking a particularly hairy plot issue in my latest WIP. Why would my villain do this thing I needed her to do? The motivations I’d come up with previously didn’t seem to be strong enough. I threw my original idea back and asked my brain for a better one.

And that’s when the train derailed and I started out across the barren prairie of my mind on foot. Where had I come up with the idea to throw my idea back and ask for another? Fully distracted now, I thought back to an RMFW conference. It was the year Bouchercon was in the same weekend as our annual Colorado Gold so we had a two-day workshop instead of the full conference. What year was that? And the guest speaker was—I’m ashamed to admit I can’t remember—someone with the last name of Cook.

I bought Mr. Cook’s tape of the event (tape, you understand, that’s how long ago it was). He talked about trusting your subconscious. I can almost hear him say, “If you don’t like the idea your imagination gives you, throw it back and demand another. It will keep working until it gives you something you can use.”

I can’t remember what else he had to say although it seems he gave us that quote about only having to see what is directly in your headlights to keep driving. But these words about demanding more from my brain have been with me every day since then. I know I benefited by his other words of wisdom but this is the gleaming gold, the nugget panned out of a river of good writing advice.

I jumped from this to thinking about Sister Janet’s blog about the Rule of 10 on Chiseled in Rock blog. http://chiseledinrock.blogspot.com/2011/03/rejection-angst-try-my-rule-of-ten.html It is such wise and thoughtful advice. I thought about the precious jewels I’ve collected from writers--those I know, those I admire, published and not-yet pubbed--that have made my journey easier and my writing better. And I thought of the advice from my Sister about using my wakefulness that started this convoluted trek through my consciousness. I think that might have been my last thought until the alarm woke me.

When I got up, I looked for that long lost tape of Mr. Cook. But it must be in a storage box in the garage and I don’t have a cassette player, anyway. I did find a bunch of conference CDs I’m anxious to listen to again.

I would really love to hear from any RMFWers who remember this conference and what Mr. Cook’s name might be. And I’d also like to hear what golden nuggets you’ve retained from your various writerly digs