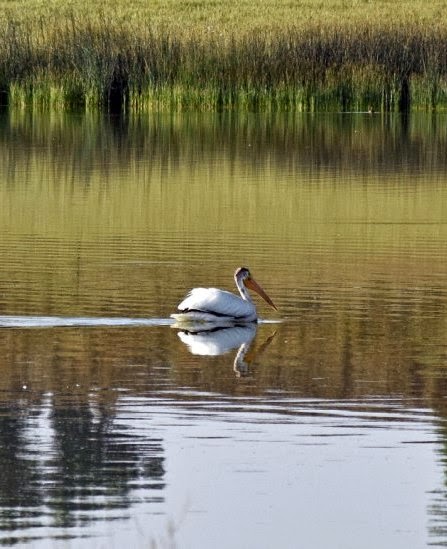 I’m a casual bird watcher and in my SF work-in-progress I’ve included descriptions of several off-world birds, including their habits and song.  I was once editing a chapter that included the description of one of “my” birds while also keeping an eye on several American White pelicans cruising around the lake.  When they’re not dipping their heads to fish, I think the pelicans look like barges, sailing majestically and without effort past their smaller kin, the Canada goose.  Flying, the pelicans tuck their necks and spread their wings wide, the black feathers on the edge of their wings accentuating the eight or ten foot wingspan – an exquisite sight.  Yet a pelican’s ungainly beak, awkward stance on land, and humorous waddle made me wonder how I would “edit” a pelican if they were one of my creations, which lead me to the conclusion that I wouldn’t.  They are fabulous.


I then considered unforgettable characters from several of my favorite books.  Some of those characters are, of course, as handsome and sleek as a kestrel in flight, but most are not, and the characters that capture my heart and wring it inside out have to cope with multiple internal flaws or challenges and often a few external ones.  Just like the pelicans, memorable characters carry on in spite of their awkward beaks or throat sacs, and frequently because of those beaks or sacs they save the day.


The pelicans reminded me that each character I write, whether hero or villain, needs to have his own story and character arc, and that loose skin and long, heavy beaks are interesting and appropriate traits for my un-edited pelican, which may be equally appropriate for a character in one of my books.  “My” birds can’t all be swans and this is good.  Hopefully, just like the pelican, they are unique unto themselves and memorable in their own fashion.


I do think though, that I might just have to give some future character a throat sac…