I recently spent the day fighting a computer virus on one of our computers, and remained fairly calm most of the morning, but by afternoon, when I realized this virus would likely defeat my somewhat limited abilities, I became quite angry. First, I was heated over the time I lost, but then, I became enraged for the lost potential of whoever engineered this particular worm.

As a thunderstorm grumbled through, I fear my (somewhat colorful) language provided a poignant counter-tempo to the growling overhead. Then, after a particularly virulent crash from on high, I laughed.

The jerk-savant who created the malware or virus, whatever the heck it was, wanted my rage. Well, I hate to break it to you sweetheart, but if you happen to read this, my anger was short lived. Instead, as the growling storm swept past our home and a rainbow crested over the eastern plains, I found myself pitying you. Someday, when you look back on your life, and your child gazes at you with adoring eyes, what story will you relate? How can you ever explain this part of your life? Worse yet, what happens much later, when the end of your life is near?

Let me explain a few things. First of all, you are not Neo, saving mankind from evil. I know that’s hard to accept, but trust me, you’re not a hero, and soon I hope you realize how you can fruitfully spend your time, efforts, and your undoubted brilliance. There’s so much to be accomplished in this world, and instead you choose to lurk in the sewer. I hope the stench soon drives you out and you find not only a new life, but some way to make amends, to ask forgiveness. I realize that is optimistic, but you see, writers have to be optimistic. We work in an incredibly tough profession, where rejection is the norm.

Ah, but those hours I lost playing your game. I’d planned on drafting and sending out six to eight queries, and instead, accomplished nothing. But here is my gift to you, along with this blog. I give you those hours I lost, to claim as your own. That way, since I give them to you freely, you cannot take any pleasure in thinking that you took them from me.

I’ve already delivered the computer to a geek to have your thumbprint removed. Poof! It shall be gone. Now, I’ll write my queries and spend time outside, enjoying the kiss of fall weather and high skies. I’ll consider my next chapter and that brings me great joy. Oh, and I might spend another moment or two pitying you, but I should caution you about that pity. You see, over the decades speculative fiction writers have predicted the future with an alarming rate of success, and I don’t foresee joy in your future, or any true satisfaction. Alas for you. Alas for a lost day.

I returned from the CO Gold Conference on Sunday with a head full of inspiration and a heart filled with gratitude for our amazing Colorado writing community.

One of several workshops I attended stood out because it addressed head-on a difficulty I’ve been having with the beginning of my book. Sara Megibow (from the Nelson Literary Agency) taught a workshop entitled:

Bang! Zoom! Pow! Those First 30 Pages and Why They are so Important and How to Make Them POP.

I’ve been to many similarly titled workshops and have found most impart the same information. But I figured it couldn’t hurt to have it all reinforced again -- especially in light of the feedback I’ve been receiving about my book, Mu Shu Mac-N-Cheese. It works extremely well except the very beginning.

My query letter is effective; I’m usually asked to send full manuscripts. My voice, I’m told, is courageous and works well with the characters and storyline. I’ve even been told by agents that it is a marketable, commercial novel. So what about the beginning is holding it back from earning representation in this tough market?

I have a lot in my first chapter, clearly too much. Mario Puzo got away with it, and one agent suggested I study the beginning of The Godfather. Puzo detailed the back-story of the various characters who sought the aid of the powerful Godfather. The lesson seemed to be that I needed to give the reader more to latch onto about the motivation of the few characters I introduce in the beginning of the book. I was also advised that my voice was so strong that it “overwhelmed the narrative.” That was more difficult to decipher. My critique groups helped me interpret this. I have a rather unusual way with language sometimes. Maybe it is the poet in me. Maybe it is my twisted sense of metaphor. Maybe I try too hard to have an atypical approach to word play. I think it is all of the above.

Back to Sara’s helpful advice. She explained four things that automatically earn rejections from their agency.
1) Data dump
2) Work not written with genre requirements
3) Awkward dialogue
4) Weak character or voice

Great advice. But none of these seemed to address the dissatisfaction over MY beginning. I’d pretty much pounded out the above common problems working over the years with my critique partners and taking a long detour writing screenplays.

Then Sara talked about what makes a beginning POP. First:

She emphasized that the inciting incident shouldn’t be in a prologue, and, in fact, “mainstream fiction shouldn’t even have a prologue.” My book is mainstream women’s fiction and the story takes place twenty years after my Midwest-raised protagonist marries into a traditional and dominating Chinese family. In the PROLOGUE, my protagonist meets her future husband on the dance floor, beginning the dance of their marriage. It’s only one page long. One page. One page! ONE page!!! It sets up the marriage! Right?

It seems I’ve started my book with one of those gnarly, dreaded darlings. And that I should work the information in, as needed, later in the book. Ironically, I taught a workshop at the conference about back-story in its various forms and specifically about writing flashbacks. I warned against flashbacks that come too early. Guess I’ll have to review my own notes.

Chop off my prologue, and luckily I still have a strong inciting incident. That is not the problem. Sara’s last observation about beginnings that POP was less straight forward than items of craft and as elusive as voice.

We’ve all experienced it. We open a book and force our way through the first few pages, slogging along, debating whether or not to take more of our precious time to unravel a tangle of too many ideas, dense prose, flowery overkill, or a mess of complicated sentences. Hers was not a surprising suggestion. But somehow, the way she stated it became an aha moment for me. I and my critique partners know my book so well that we don’t recognize the introduction of too many conflicts, each on the heel of the other, and the story promise with too many angles. The morass of too-tight writing.

I cared too much about getting it right, about dragging the reader in with so many questions to be answered, and not one spare word. I’ve over edited the beginning of Mu Shu Mac-N-Cheese to the point of being dense compared to the rest of the book that manages to breathe. It wouldn’t be too far off to call the beginning constipated while the rest is…well… smooth moving.

I now have a plan of attack. Not an easy plan, especially for this freelance editor who usually deals with tightening chubby prose. But what in a writing career is easy? I am going to make my entire book breathe.

Make it an effortless read.

From the InkPot
Posted by Sisters of the Quill at 9:13 PM 14 comments:

Fogg in the Cockpit Book Signing at the Leanin' Tree Museum of Western Art on August 30, 2011

Thank you again, Julie and Karen, for organizing and hosting such a special event. You created a magical evening, one we shall never forget. And thank you as well to the Trumbles, who so generously shared their spectacular Museum of Western Art with all of us. ~ Dick and Janet Fogg 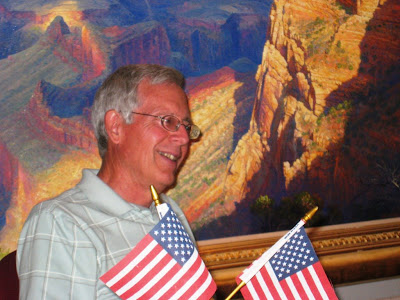 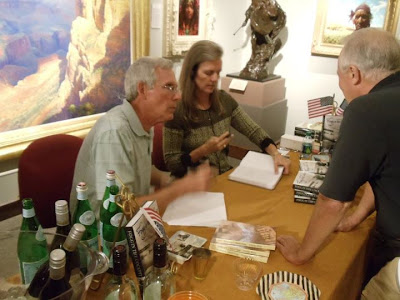 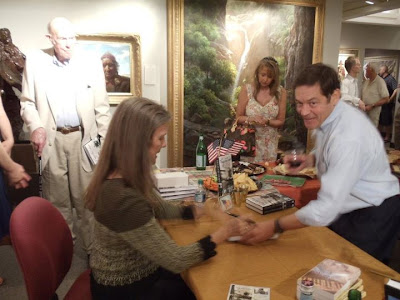 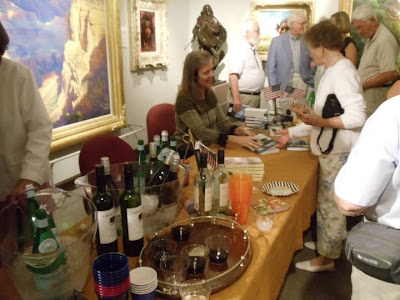 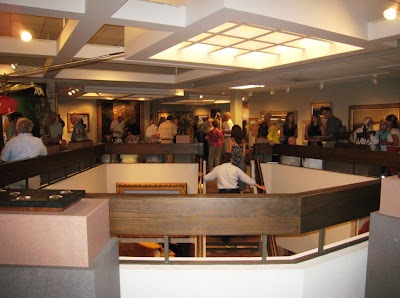 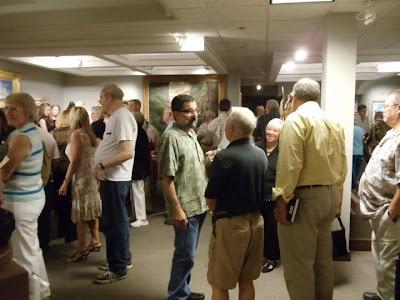 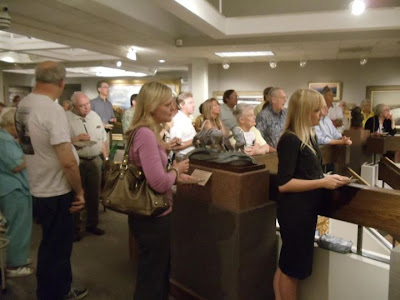 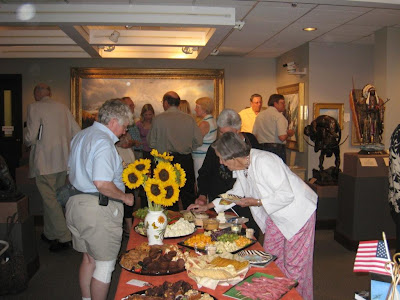 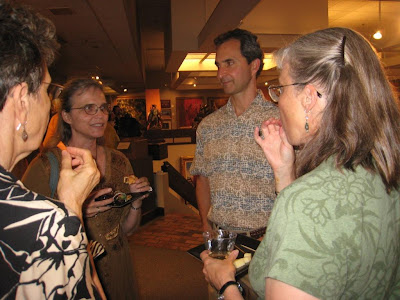 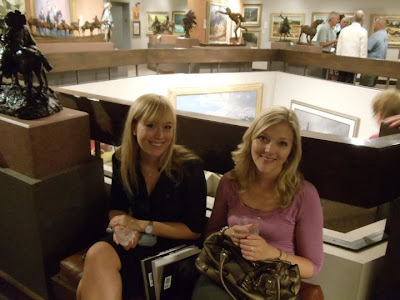 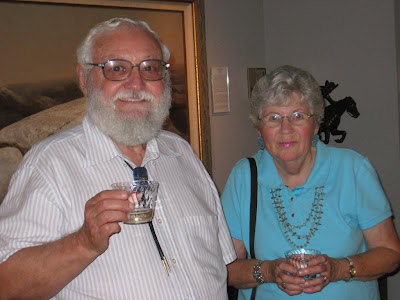 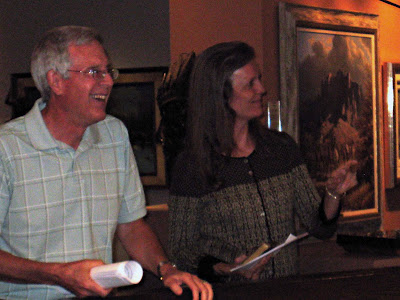 Figure Out the Fix

Time for another go at Mu Shu Mac-N-Cheese. After many glowing rejections, one agent was able to spell out more clearly what’s wrong with it.

Others came tantilizingly close to grabbing it up, loved the writing, the characters, the storyline, the premise…but…something was not quite connecting. When it comes to editing, it's pretty hard to work with a vague feeling.

Today, in contrast, I feel I have something more to work with. The new plan: after brushing up the last two chapters I wrote on my new one…I’ll put it aside and go back to Mu Shu, do a read and summary, and try to figure out how to make each chapter "swell under its own crescendo." That is the writing life: Figure out the Fix. Thank you Barbara Poelle of Irene Goodman Literary Agency.
Posted by Sisters of the Quill at 10:28 AM 2 comments: